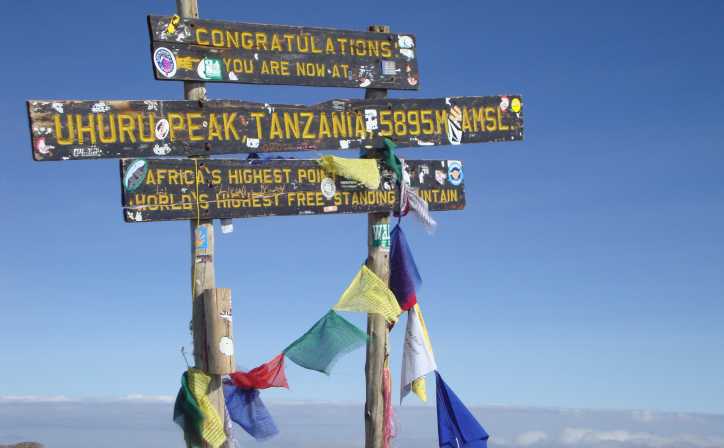 If you have opted for the optional airport transfers, we will pick you up from Kilimanjaro Airport or Arusha airport and transfer you to your hotel in Moshi.

Pre-trek briefing at your Moshi hotel. You should be planning to arrive atleast one day before the start of the trek. Today we will spend in having a pre-trek briefing. We will also review your equipment and rent any equipment which is needed.

Drive from Moshi to Machame Gate takes about 45 minutes. The journey passes through the village of Machame which is located on the lower slopes of the mountain.

We depart the park gate and walk through the rain forest on a winding trail up a ridge. At lower elevations the trail can be muddy and slippery. Gaiters and trekking poles are a good idea here. We continue a short distance until we reach the Machame Camp.

After breakfast we leave the glades of the rain forest and continue on an ascending path, crossing the valley along a steep rocky ridge. The route now turns west onto a river gorge until we arrive at the Shira campsite.

From the Shira Plateau we continue to the east up a ridge, passing the junction towards the peak of Kibo. As we continue, our direction changes to the South East towards the Lava Tower, called the “Shark’s Tooth” (elev 4650m/15,250ft). Shortly after the tower we come to the second junction which goes to the Arrow Glacier. We now continue down to the Barranco Camp. Although you end the day around the same elevation as when you began, this day is very important for acclimatization and will help your body prepare for summit day.

After breakfast, we leave Barranco and continue on a steep ridge up the Barranco Wall to the Karanga Valley and the junction which connects with the Mweka Trail.

We continue up to the Barafu Camp. You have completed the South Circuit, which offers views of the summit from many different angles. Here we make camp, rest, enjoy dinner, and prepare for the summit day.

Very early in the morning (midnight to 2 am), we continue our way to the summit between the Rebmann and Ratzel glaciers. You head in a northwesterly direction and ascend through heavy scree towards Stella Point on the crater rim. This is the most mentally and physically challenging portion of the trek. At Stella Point you will stop for a short rest and will be rewarded with the most magnificent sunrise you are ever likely to see. Faster hikers may view the sunrise from the summit.

From Stella Point, you may encounter snow all the way on your 1-hour ascent to the summit. Once at Uhuru Peak you have reached the highest point on Mount Kilimanjaro and the continent of Africa!

From the summit we begin our descent by continuing straight down to the Mweka Camp, stopping at Barafu for lunch. You may want gaiters and trekking poles for the loose gravel going down. We arrive at Mweka Camp and enjoy our last evening on the mountain.

After breakfast we continue the descent down to the Mweka Park Gate to receive your summit certificates. At lower elevations, it can be wet and muddy. Gaiters and trekking poles will help. Shorts and t-shirts will probably be plenty to wear (keep rain gear and warmer clothing handy).

Monkey Adventures vehicle will be waiting for you at Mweka gate to drive you back to your hotel in Moshi (around 60 minutes).

We offer the following hotel options

Please note that if any hotel is booked out or is otherwise unavailable, we will book you in an alternate equivalent hotel.

If you are booking a hotel directly, please do check with us before booking, to make sure we can meet you and pick you up from the hotel.

We offer the following addons to your gear

Our packages by default include a foam sleeping mattress of 2 inch thickness, if you want a thicker alternative you can opt a 4 inch foam mattress with above mentioned extra cost.

We offer the following transfer options

Prices for a Private Trek

Please find below the prices for organizing a private trek. The prices are based on your group size.

Nicknamed the "Whiskey" route because the route is popularized as somewhat difficult and more expensive than Marangu route.

On an overall comparison of the routes to scale Kilimanjaro, this is one of the best routes to take, both in terms of acclimatization and cost.

The Machame route is considered a difficult route, and is better suited for more adventurous trekkers and those with some hiking or backpacking experience.

The Machame route is scenically beautiful and varied. However, due to its popularity there are increased numbers of trekkers, it loses some of its splendour. The Machame route approaches the summit from the southwest and descends using the Mweka route, rewarding climbers with views of the expansive Shira Plateau, an optional scramble up Lava Tower, a climb up the Great Barranco wall, and a traverse underneath Kilimanjaro’s southern ice field.

In certain sections this route is steeper than the Marangu and Rongai routes and physically more demanding but is easier overall.

STARTING FROM $1608 PER PERSON IN A GROUP TREK

Once a tour is booked, its guaranteed to go, even if there is only single client for the entire trip

Book by paying advance by card on our website. Balance can be paid upon arrival, before the tour

Our minimum requirement for operation is only one client. So we can offer the tour any day of the year for you

"I booked my 8 Day hike of Mt Kilimanjaro with Monkey Adventures, summiting in October. I highly reccommend Monkey Adventures. During the booking process they responded quickly to all my questions,......"

"The crew was amazing, the food was great and abundant and compatible with our needs (eg. Vegetarian options). Most importantly, the guides kept on supporting and motivating our whole group of 8......"

"I had the chance to reach the top of Africa via Machame with Monkey Adventures. I was amazed by the service and ths support they provided. Everything was clearly explained from the first briefing......."

Trip of a life time!

"I couldn’t have chosen better!This whole experience was more than amazing. As a single female traveler, I was a little nervous about traveling to Tanzania by myself, going to Kilimanjaro and a......"

"The trip was very well organised, the tents, food and rental equipment were first class. But most importantly, the guides and the porters who accompanied us on our trip were simply amazing. I have......"

"From the outset of booking to the trip itself, everything was very smooth and professional. The company were very flexible with the fact that I was unsure if I wanted to do 6 or 7 days and......"

"Organising the trip prior to arrival Monkey Adventures was very professional and quick to answer any questions. The trip itself was an amazing experience I will never forget. They were very......"

"6 of us ladies went on the 7 day Lemosho route with guides Dennis and Nasri. Dennis’s team was INCREDIBLE! All of the porters, guides, and cooks were so accommodating, they went above and beyond......"